1967: The birth of food trucks in Germany

Necessity is the mother of invention! In 1967, Max Hertel found he was no longer able to sell his freshly slaughtered chickens. Frozen meat had suddenly become cheaper. The farmer’s desperation grew as the chickens in his barn grew every day.

By chance he came across a used chicken grill. In June 1967, he decided to put a grill unit in his VW bus, load it chickens, and drive to the weekly farmers market in Selb, Germany. There he sold rotisserie chicken from a food truck for the first time. Fast food was not common in Germany at the time, and so the introduction of rotisserie chicken from a van was something new. The roast smell and curiosity soon attracted customers. And Germany's first mobile chicken grill was born.

Selling rotisserie chicken from the van became increasingly successful. However Hertel soon discovered that his makeshift solution was not very practical. The next challenge for the innovative thinker was find a better solution. Just two months later, Hertel replaced the VW bus with an enclosed trailer with two integrated grills.

In 1969, Max Hertel designed and built his first grill unit. Not satisfied with the grills available on the market at the time, he designed a grill that was easier to use, more efficient and longer lasting. A year later, his first handmade food truck rolled out of the workshop. The box van with drop shutter, three Hertel grills, integrated gas supply and refrigeration unit caused a minor sensation in 1970.

In 1987, the company began manufacturing the entire superstructure for the food trucks in its own workshop. Hertel chose to use 100 per cent stainless steel to ensure longevity and cost-effectiveness.

Ideas for further improvements always came from the mobile sales operation. This is our competitive advantage: we build and we use the vehicles. We build so that we can put them to good use.

Today: Food trucks and trailers around the world

Today we build food trucks not just for our own use, but also for customers worldwide. Poultry meat is cheap, wholesome and is not subject to any religious restrictions, so chicken is eaten around the globe. And takeaway food is now a worldwide trend.

The robust construction of Hertel food trucks offers decades of use. Fulfilling the challenging country-specific regulations for our food trucks often brings out the best in our design engineers. Food trucks produced in our workshop in Schwarzenbach/Saale are operating in the Czech Republic, Hungary, Austria, Lithuania, Italy, Ireland, the USA, Libya, South Africa and Australia. 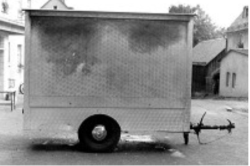